One afternoon in August, 1985, a young boy wandered away from a day camp in North Searsport; he was in the woods all night before being found in the morning. Six weeks later, a private plane piloted by a local resident crashed in the Penobscot River. The plane was not found until three weeks later, at which time it was discovered that the pilot and his passenger both had died.

These incidents demonstrated the need for a local group trained in search and rescue techniques. In January, 1986, the first meeting was held to organize such a group. Once a month since that date, the group – Waldo County Search and Rescue – has conducted meetings and trainings in basic search and rescue, survival, map, compass and GPS, first aid and CPR.

What kind of searches does WCSAR do?
Sometimes we are looking for lost hunters or fishermen who have not returned. Many times, we find ourselves searching for elderly people suffering from disorientation, Alzheimer’s Disease or autism, who have wandered away from their homes. On occasion, we are called out to locate a murder victim, or to help find clues in a criminal investigation. We’ve been called out for missing skiers on Maine’s mountains, and assisted in searching for lost vacationers in Maine’s thickest forests. But perhaps our most overwhelming response is to that of a missing child; being parents ourselves, we’re driven to locate and return missing children.

How are we called out?
In a lost person situation, time is critical. When a person is reported missing, the Maine Warden Service conducts a hasty search, which consists of checking the roads and trails in the area. Time plays an important role in trying to contain the lost person in the smallest area possible.
If Wardens fail to find the victim, the Maine Search and Rescue Dog team is dispatched before the area is contaminated by ground searchers. Only after this search fails, the ground searchers are deployed to do grid searches of the area. We are activated and under the direct command of the Maine Warden Service.

Who are we?
Our team is comprised of a variety of people: firefighters, EMTs, recreational safety instructors, outdoor enthusiasts and civilians with a diversity of experience. As safety instructors for the Department of Inland Fisheries and Wildlife, many of us teach young hunters map and compass skills, first aid, and survival – how to be prepared to spend the night in the woods and survive.

Waldo County Search and Rescue is a non-profit organization made up entirely of volunteers, and existing on member-donated funds, grants and charitable contributions. The team can find itself called to any part of the state to search for a missing person. Our members donate their time, vehicles and fuel to this cause. Over the years, we have acquired and equipped a rescue trailer which accompanies us on searches. This trailer contains backboards, ropes, GPS units, radios, a generator and other gear. We are also an Emergency Management Agency “CERT” group (Community Emergency Response Team), and can be activated by Waldo County EMA in the event of a disaster. , 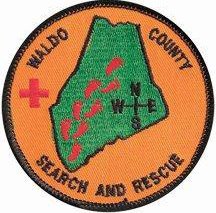 Welcome
Welcome to the Waldo County Search and Rescue website!